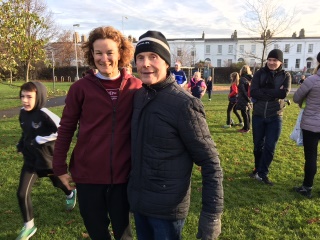 It’s always one of the highlights of our calendar year, “The Turkey Trot”…… a great occasion with parents, athletes and club members getting together to enjoy the festivities and take a well deserved break after another long, enjoyable and successful twelve months. And this year we were honoured to be joined by Sonia O’Sullivan and her daughter Sophie. Needless to say there was great excitement and both Sonia and Sophie were quickly into the festive spirit and took some time out to pose for photos with young and old. She was also very happy to present the seven main awards (see details below) and we would like to thank Patrick Bolger for organising this visit. The club is greatly appreciative of their support and congratulations from us all on Sonia’s Outstanding Achievement Award at the Irish Times/ Sports Ireland Sportswoman of the Year awards over the weekend.

Master of ceremonies, Peter Cosgrove, was right on cue announcing the various age category winners leading up to the main awards. Lara Gilespie, Jack Moraghan and Oisin Kelly scooped the Overall Athletes of the Year prizes. Their performances, dedication and above all commitment to improve in each and every session were just some of the endless list of attributes for these three worthy winners. The talented duo of Hannah O’Brien and Ella Cowman were deserved winners of the Mary O’Connor trophy. Both girls train in the U12 age group. This year we added a new category to recognise the outstanding performances of Sarah Healy (Falkirk) and Amy Rose Farrell (Kent) in the SIAB’s. Dermot Jackson was the first of two awards in Club Person of the year and was paid a glowing tribute by Peter Cosgrove who was then acknowledged by the club in similar fashion. A nice surprise for both recipients who have made an immense contribution on and off the track over the last six years.

Claire McGoldrick and the team also deserve a mention for their great work serving up drinks and snacks to the sizeable crowd.

Thank you to all