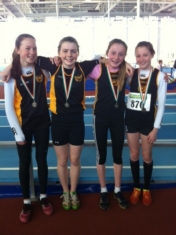 Congratulations to the girls U14 relay team on a fantastic silver medal in the 4 x 200m All Ireland final at AIT earlier today.

Our U12 & U13 teams were in action in the 4 x 100m relays and whilst they were slightly below par both teams finished 7th quickest in their age groups thus narrowly missing out on a final spot. It was great experience for them all in what was their first run in this competition at the fantastic venue. The squads were: Emma O’Brien, Aoife Linnane, Ellen Cheung, Laura Gallagher, Kristina O’Connor, Sinead O’Shea, Sarah O’Dea, Sarah Healy and Lucy Lynch. Well done to Leevale AC and Donneen AC who both registered new National records in the respective finals.

The U14 team had qualified as the third fastest team in a time of 1.55.68 which was an improvement of 4 secs on their Dublin time. In a pulsating final the girls showed fantastic resilience and determination to take a well earned Silver medal and bettered their time to 1.53.66. The team got off to a flying start from Sarah O’Dea, and were aided by terrific runs from Robyn O’Brien and Sarah Healy who set up Natasha Twomey to take us home in a strong second place delighting the support from parents and the other BAC athletes in the stands.. Congratulations to Nenagh Olympic on setting a new National record and well done to the girls on another great event for the club.