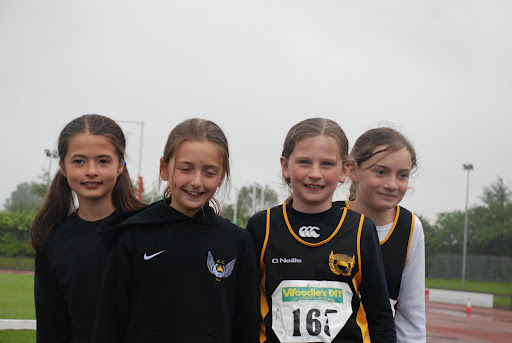 **Fantastic day at CIT in Cork for our Club**

Congratulations to our squad who secured top 3 results in the sprints and relays on Saturday at CIT in the All Ireland U9-U11’s Team event.

In what was a rollercoaster day, great credit is due to those who participated and did the club proud in the various age groups. The standard of athletics was high and the crowd witnessed some “stars of the future” including a fantastic team performance by St Laurence O’Toole in the girls U11 600m.

The day started with a silver medal for Emma O’Brien & Laura Gallagher in the girls U10 60 metres. All the emotions of an All Ireland were on display as initially the girls were awarded first place which was then revised to second place behind eventual winners Galway CH. This was a fantastic performance from both Laura and Emma who have been highly consistent throughout this year’s T&F campaign.

Then it was the turn of our girls U’11, Kristina O’Connor and Ellen Cheung, who secured a well earned bronze medal in the 60 metres. This age group produced some fantastic times including those from eventual winners Finn Valley AC and the girls deserve great credit for putting in a polished performance.

In the boys U11 both Evan Walshe and Mark O’Brien ran PB’s in the 600m and this secured them 6th place overall in what was a firecely comptitive age group. They also represented BAC in the 60 metres but were unlucky as their race was run in the worst of the weather conditions which had an impact on their overall combined time.

Annalisa Clarke (with Kristina O’Connor) represented us in the ball throw and she managed the 5th longest throw of the day for the team to finish in 8th place overall.

Then it was the turn of our U11 relay team led by an in form Kristina O’Connor, they stormed through the semi’s with one of the top 4 times against the likes of Finn Valley, Doneen AC and Ferrybank.

What is it about the relays always bringing track meets to an exciting close?  It was the last event of the day and they were within touching distance throughout the race eventually finishing in a tie for 3rd place (the photo finish could not separate both teams) and a fitting way to end an action packed day in Cork.

What was even more impressive was that two members of this team were running up a year and their contribution was invaluable.

Well done to Athletics Ireland and CIT for putting on an excellent event in difficult weather conditions and the club would like to thank all those who made the journey to Cork to support the squad.

Well done to all involved.