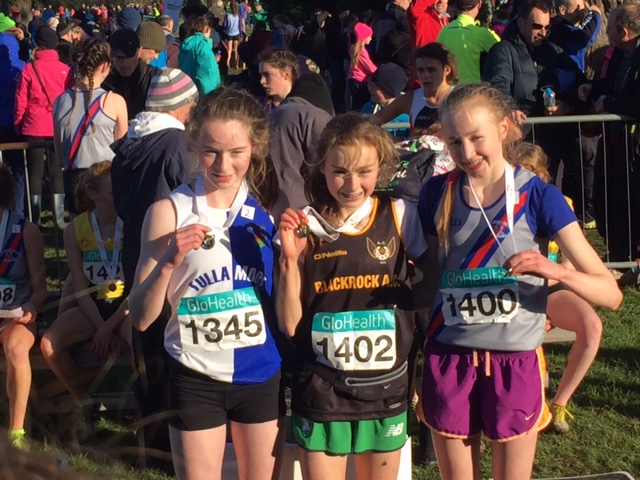 Update: Congratulations to AmyRose Farrell on her selection to the Irish U16 XC team who will take part at the Celtic International in Scotland in January 2016.

Santry played host to the Even Age Juvenile XC championships and National XC championships earlier today with AmyRose Farrell putting on an outstanding display of front running to take the girls U16 4000m title.

Having been installed as one of the pre-race favorites earlier in the week, it was an emphatic performance. Cheered on by Family and the large Blackrock contingent, she broke away from the main contenders at the top of the course on the second lap making light of the tricky underfoot conditions and poured on the pace increasing her lead on the last lap and running out a very impressive winner. Her performance drew plaudits from the large crowd on the day and she had the added bonus of leading the Dublin County Team to first place and the Provincial team to third place. Well done to AmyRose who will now turn her attention to the U17’s in a few weeks in Waterford. Congrats from all at BAC.

Earlier in the day our girls & boys U12 teams put in some gutsy performances with both teams acquitting themselves well in highly competitive races. This was a great reward for the U12’s who are consistently qualifying for National races and doing us proud. Simone was part of the Dublin County team who finished in 3rd place. Well done to you all.