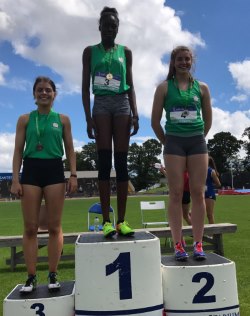 We had some outstanding performances by our Athletes on Saturday as the T&F season continues to gather momentum towards some notable European and SIAB competitions over the next three/ four weeks.

Both Sarah Healy (1500m) and Amy Rose Farrell (3000m) notched up A qualifying standards WITH five other athletes (Robyn, Lara, Roisin, Beth & Oisin) shining in the colours of Leinster at the Tailteann Interprovincial games in Santry.

Belfast: Congratulations to Sarah Healy on a superb win @ the IMC 1500m A race with a big PB of 4.20.84 and in doing so achieving the A Standard (4.24) for the European U20’s in Italy. Well done to Sarah on a fine series of races over the last few weeks.

Watford: Amy Rose Farrell got a second qualifying time of 9.35.94 (almost identical to her first) @ the BMC Grand Prix event in Watford to be comfortably inside the European U20 3000m standard (9.40). This was a very impressive performance by Amy Rose given it’s only her second race back in the last few months.

Santry: We had five athletes in action for Leinster at the Tailtean games in Santry. Robyn O’Brien was in outstanding form grabbing a bronze in the 200m and gold in the 4 x 100m relay and she also had a fine fourth place in the 100m. Oisin Kelly gave the gallery an exciting finish when he stormed to second place in the 1500m steeplechase whilst Rosin Treacy was equally impressive taking second place in the girls 1500m steeplechase. Lara Gilespie (who was just back from TY charity work in Zambia) had a fine run in the girls 800m finishing in fourth place whilst Beth Sweeney had a PB in the Long Jump to sign off on another great season.

Well done to all our athletes….