Blackrock A.C. Juveniles participated in last Saturday’s Dublin Pairs event. A selection of photos can be seen on our Facebook page with individual reports below.

Leading the way, the girls brought home 5 pair medals across our 9 young athletes.

In the 60m Maya Mobius and Ciara Sengupta won gold with Amelia Burns and Nieve Gleich bringing home the bronze medal. Our third pairing of Sarah McCarthy and Sadbh O’Hare competed superbly in their heat to top off Blackrock’s excellent 60m entries.

In the last event of the day for the u10s, the 500m, Amelia & Isla won bronze finishing 2nd (Amelia) and 3rd (Isla) in their heat whilst Lara & Annabelle also finished very closely in their heats battling hard despite both suffering early stitches.

Not far behind the girls in terms of medal collection, our u10 boys brought back 3 pairs of medals and plenty of personal bests from the 9 young athletes.

Our 60m boys were very unlucky not to come away with a medal with the pairing of Matthew and Des White storming home in 1st (Matthew) and 2nd (Des) in their heat.  Whilst the pairings of Sebastian and Oisin O’Hare plus Paul and Ethan ran brilliantly in their very fast 60m heats.

As in the girls long jump, Blackrock AC tasted double delight in the Turbo Javelin with the pairing of Matthew & Josh winning gold with only centimetres separating our second pairing of Sebastian and Theo Loughrey in the Silver medal position.

In the long jump, our pairings of Theo & Tadhg alongside Paul & Ethan all secured personal bests performing against a very strong field.

Our third and final medal for the boys was secured in the 500m with Josh and Des winning gold after coming 1st (Josh) and 3rd (Des) in the fastest of the boys 500m heats.  Our second pairing of, Oisin and Tadhg, both ran superbly in the first 500m heat to top off a great day for the u10s. 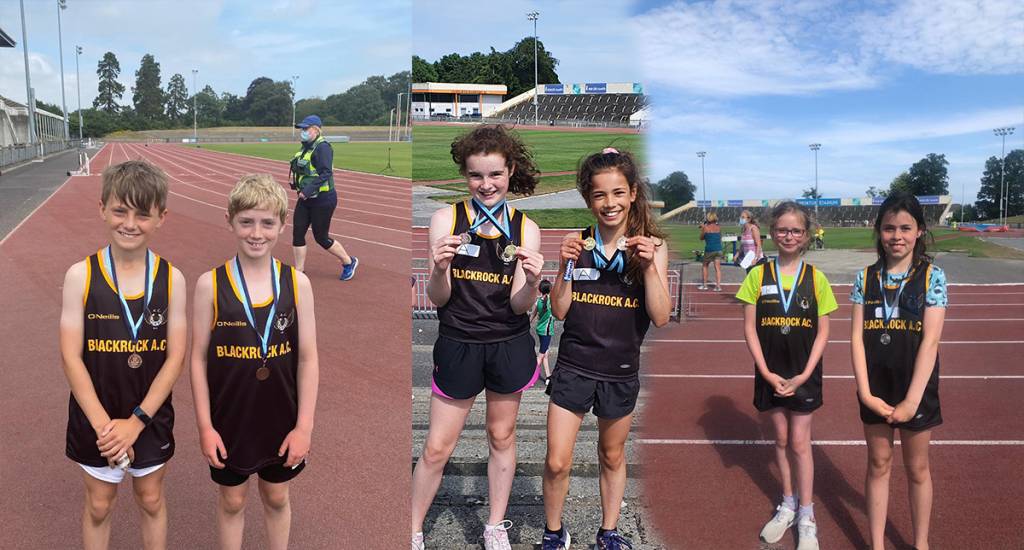 Our U11s were represented by five boys and four girls. With just three of them who had previously taken part in club competition, the pairs event was the ideal introduction.

In the morning session, Ethan/ Conor and Sam/ Elliot all ran very strong 60m sprints, with both Ethan (2nd) and Sam (3rd) placing in their heats. Conor and Elliot both ran very well
also in a highly competitive field. This was followed by some solid turbo javelin throwing by Fabio and Sam in a large field of competitors.

As a pairing in the 600m, Fabio and Ethan stormed through to finish second and third in their heat (2:02 and 2:03 respectively), behind the winner of the individuals race the previous week, winning a bronze medal in a very tight contest with only 3 seconds separating the top 3 teams! Conor came a strong second in his heat running a very credible 2:10 with partner Elliot also running well.

Both girls’ teams enjoyed a very successful afternoon, medaling in all three events the club was represented: Sian/ Ciara secured gold in style in the long jump, based on their third and final attempt. They also won bronze in a hotly contested 60m sprint, in which Emilia/ Evelyn also performed strongly.

The session was topped-off by Emilia and Evelyn who, in a group largely dominated by MSB, threw some impressive distances to become turbo javelin silver medal winners!

A hugely enjoyable event for all involved and the U11 coaches are really proud of everyone who took part.

Well done at all.