On Saturday 9 October 2021, Michael Ferndale will be embarking on a special running challenge and needs Blackrock Athletic Club’s support. Starting in Dublin’s Phoenix Park, Michael will be doing 5 marathons in Dublin, Belfast, Cardiff and Edinburgh before finishing with his final one in London over a 5-day period. This sponsored run is supporting the charitable work of the Lord’s Taverners and Change Foundation charities. What makes this challenge especially interesting is that he will be doing them all running backward! So that’s where we come in.

Who is Michael Ferndale?

No stranger to challenges, in 2016 Michael completed the 257 km Marathon des Sables in the Sahara desert, known to be the toughest foot race in the world, to raise money for The Lord’s Taverners to give disadvantaged young people a sporting chance. He completed the 2017 London Marathon running facing backward for the same charity.

In order to make sure Michael makes it around safely and avoids injury, we need up to 3 runners at all times to accompany him through Phoenix Park, ensuring we keep our distance from the deer and any other obstacles.

The suggested route is the Dublin Half Marathon Route twice round

From the starting line inside the park at the corner of Chesterfield Avenue and Ordnance Survey Road, runners head southeast along Chesterfield until they reach Odd Lamp Road, where they turn left and head north along this road, which merges with North Road. Runners then follow North all the way as it loops back around along the northern end of the park, meeting up with Ordnance Survey Road, which they follow until turning left again onto Furze Road. After a short stretch along this roadway that cuts through the centre of the park’s northern half, runners then turn right back onto Chesterfield, which they follow all the way down to the park’s southeastern end. 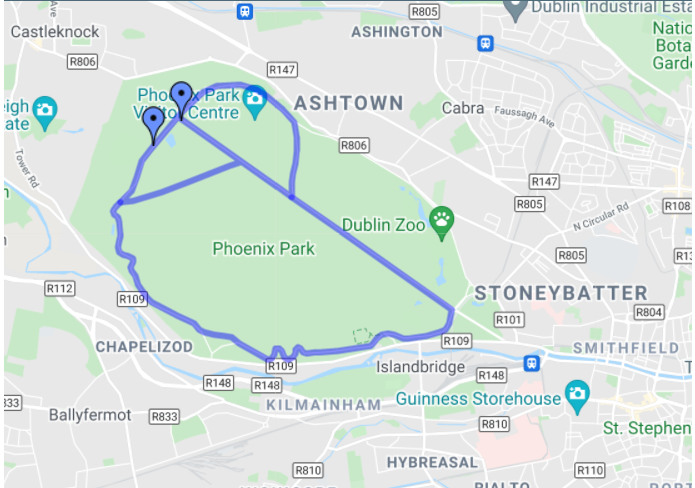 Saturday 9 October at 7am.

The aim is to start at 7am and be finished by 3pm. The estimated pace is 7m/km, bearing in mind he will need to pace himself for the 5 days.

Members are welcome to join for some or all of the challenge on the day. All of the support runners will be running in a forward movement while our runner does the route backward.

Ideally will need 9 – 12 members, depending on how long each can join Michael to complete the estimated 8-hour challenge.

If you are interested in offering support to Michael Ferndale on the day, please enter your details below. We will need to operate on a first-come basis if there are too many volunteers.