Mary Butler was awarded Club Person of the Year at the recent Blackrock A.C. AGM which took place Wednesday 9th December 2020. Below is the speech which was given on the evening by club chairman Barry Thornton while making the award. 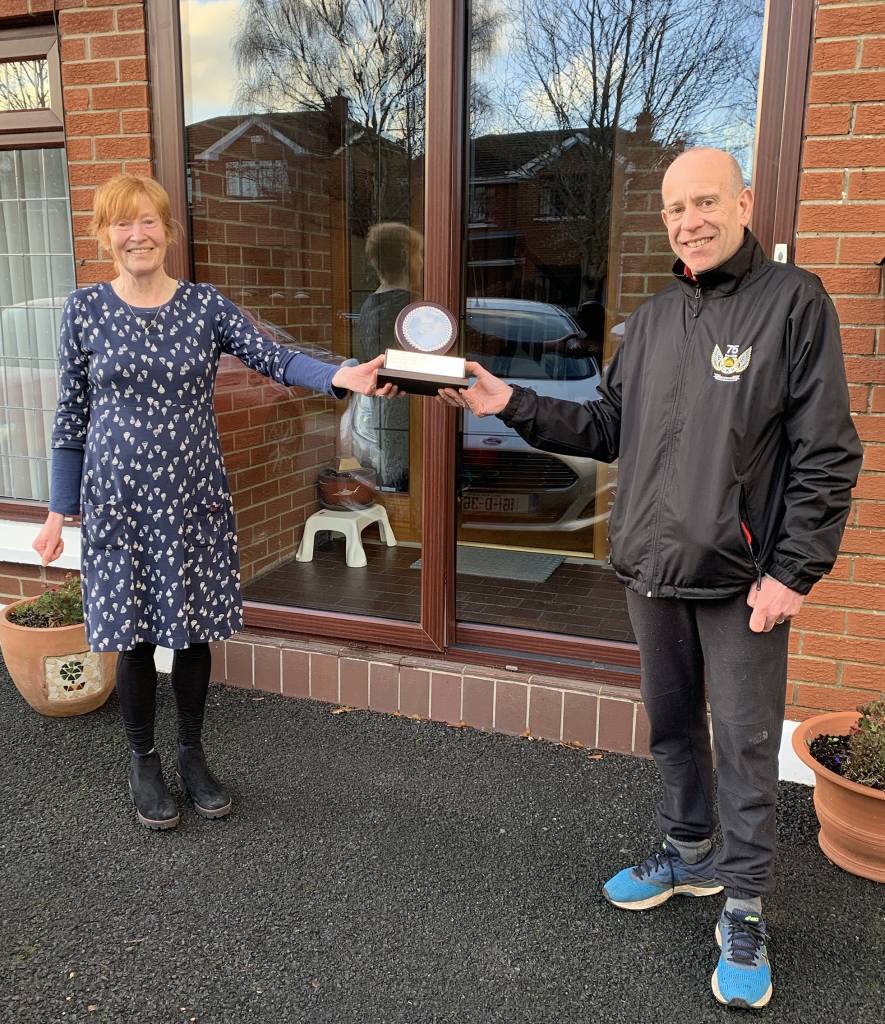 We traditionally have made this award at the turkey trot.  As it will not be on this year, we are making it tonight.  This award recognizes the contribution someone has made to the club, generally over a period of many years.  Having discussed this year’s winner with a number of people, I know how popular a decision it is and how deserving she is of it.  This year’s winner is….. Mary Butler!

If I included all the wonderful comments that were given to me about Mary we would be here all night, there were that many.  Mary is well known in and has made a great contribution to the running community in Ireland for many years. She actually ran with two other clubs (UCD and Crusaders) before she got sense and joined Blackrock A.C. in 1993.  She has been a constant presence in the club since then, having been a driving force women’s section, as a participant, coach, administrator and mentor to many over the years.  When all sections of the club were merged together 8 or 9 years ago Mary was instrumental in making that happen and served on the committee since then.  She organised the 75th-anniversary dinner last year which was a great success.

As well as all of this, Mary has been a long time participant and committee member of the Meet & Train women’s race meetings.  She was on the organizing committee for the very first Dublin marathon in 1980 and we all know what an incredible success that has become.  She still helps at both registration and the finish line every year.

Mary has also had, and continues to have, a fine athletic career, has competed with distinction at club, county, regional, national and international level.  Remarkable as it may seem now, when Mary started it was frowned upon for women to compete, especially in long-distance races.  But Mary did not let that deter her.  In 1977 when it was unheard of for women to enter a 10-mile race she entered Business Houses handicap race … and showed all the men up by winning it!  In 1980 she became the second Irish female athlete to run a marathon when she ran the Avon International Marathon in London and became the first Irish women to run in less than 3.5 hours.  This was a women’s only marathon arranged to prove that women could and should run marathons as part of a campaign to have a women’s marathon in the Olympics – which then happened in 1984.  She went on to set a PB of 3.12 in the Dublin marathon in 1981.

She is a member of an elite group of women who participated in the first 32 women’s 10k mini-marathons in Dublin 1983 – 2014.  She has actually run in all of them except 2015 when she attended a family wedding.

Mary remains an active runner and has set some age graded records at parkruns in recent years.

Mary has led the way and been an inspiration to thousands of women who followed her lead in running distance races, including people like Catriona McKiernan and Sonia O’Sullivan.  It is fitting that, as we honour Mary, I learnt this week that 52% of all members in AI clubs are now female and that our new proposed committee is almost 50% female.  It is also great that Mary’s last act as a committee member is to pass the motion to change all references from ladies to womens in club documents.

Despite all of her achievements, what makes Mary so popular is her wonderful personality.  Peter and I discussed her recently and we both noted what a great support she has been to us both as chairmen, how she is always a calm voice and a rock of sense.  I know that frequently when there is a decision to be made about club matters Mary is one of the first people I call as I know I will always get sensible advice, that is always motivated by what the best thing for the club is.  I know she has been a tremendous support and role model to many women in the club over the years, especially this year during a tough time for many.  Her advice and support is always delivered with her very pleasant manner and her big smile.

Mary, I have to say, it is an absolute privilege to present this award to you tonight. Thank you for everything you have done for us  – I will drop this lovely trophy into your house soon.  At this point I know that if we were in a hotel room having this meeting you would get a standing ovation – so can I ask everyone to join me and do that virtually!