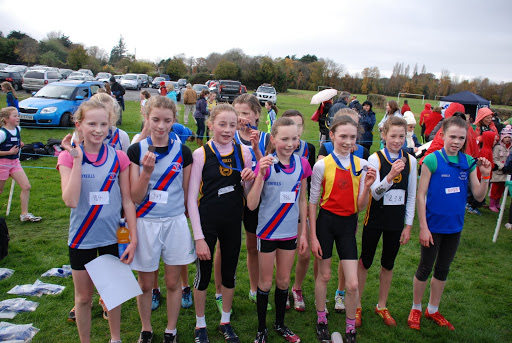 We’ll start with the hugely energetic Under 9 squads who once again showed the true value of a team effort.
In the girls race we had top 10 finishes from Sarah O’Brien (4th), Isabel O’Brien (5th) and Isabel Lynch (9th). They were ably assisted by Orla Byrne, Grace and Helen Cawley and Rachel Kenny. The girls picked up second place in the team event and this rounds off a fantastic year for them. In particular both Sarah and Isabel O’Brien have led from the front throughout the campaign. Well done girls.

We had high hopes for the team gold in the boys Under 9 race and they didn’t disappoint with a huge effort from Louis Dignam (5th), Daniel Mullane (9th), Fionn Boyd (10th), Doug Walshe (13th), Patrick McDonnell (14th), Tom Cosgrove (16th), Barry Winters (17th) and Lorcan Martin (19th). They took the team gold by one point and again finished off a fine year in style. This team has the makings of a fine squad in the coming years and they have shown a great appetite to work for each other. Well done lads.

The future is bright for Blackrock AC.

Aoife Linane raced to a fantastic 9th spot in the girls under 11 1500 metres and her fine performance leads to her representing Dublin in the All Ireland’s in Wexford in December. Well done Aoife on another fine performance in her first year with the club. Sarah Flaherty also ran a fine race in this age group.

Sean Kinsella raced hard to finish 12th in the boys under 13 2500 metres and he will once again represent Dublin at the All Ireland’s. Well done Sean.
Jack Moran was as determined as ever in finishing his campaign. This is Jack’s first season with the club and has done remarkably well over the last few weeks.

And so to the first of two outstanding races on the card. Evan Walshe has been knocking on the door over the last few weeks and was going in search of his first victory of the season. It was a see-saw battle with Pappy Tucker from Crusaders and the lads produced a nail biting last 200 metres as they went stride for stride in Marlay. Every picture tells a story and the gallery is well worth looking at to truly understand the effort from Evan. Whilst he was marginally beaten into second place it was a fine performance and he will now play a vital role in pushing Dublin for National honours in a few weeks time. Patrick Crotty, Alan Casey, Cianan Martin and Thomas Byrne also represented Blackrock in this race.

Natasha Twomey and Sarah Healy have been stand out athletes for us all year and were coming up against the reigning all Ireland champion in the girls under 13 race. A group of 5 broke away early in the race and as they climbed that last hill it was down to four with both girls in the hunt for a top three finish. At one stage they were 20 yards off the front two but worked extremely hard in pulling back the gap and in the end it was Sarah Healy who finished in second place with Natasha narrowly missing out on third place but running extremely well to finish 4th. For Sarah, this was a fantastic performance as she will qualify for this age group again next year and Natasha continues to shine since joining the club in April of this year. Both girls will form part of a very strong Dublin squad which based on today’s performance will be very difficult to beat at the Nationals. Well done girls.

Finally we would like to congratulate all the athletes who have taken part in the leagues, last weeks Even age groups and today at Marlay. DSD, Clonliffe Harriers and the Dublin County Board have put on a great few weeks of cross country races and well done to all involved.