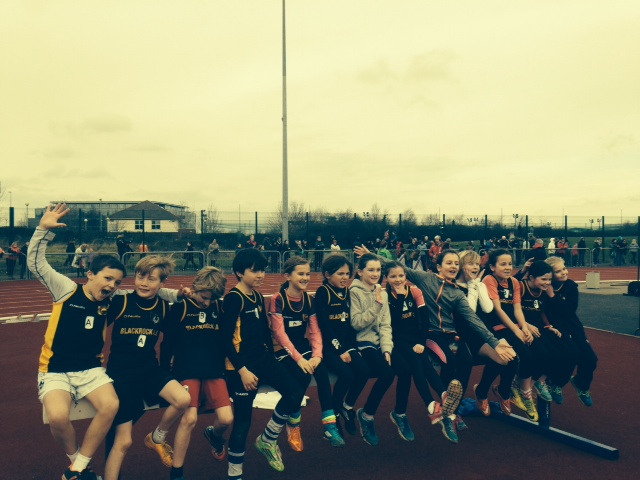 The relays took place earlier today in Tallaght A.C. and the BAC squads were in full flow with five Dublin Indoor Titles and eight squads finishing in the Top 3. This is always a great day out with huge crowds gathering for the various races and no shortage of exciting finishes with the Blackrock “vest” in the thick of it throughout the day.

Girls & Boys U12: Well done to the squads that have qualified for the Nationals. The outstanding Isabel O’Brien helped her team storm to victory in the U12 girls final whilst the boys A & B team fought it out for the third place with Oliver holding on with the smallest of margins.. A great set of results against some very strong competition.
Girls A Team: Sarah OBrien, Simone Towns, Abby connaughton and Isabel O’Brien.
Girls B Team: Isabel lynch, Natasha Rolland, Hannah O’Brien (running up a year) and Lucy Schwer missed out on the final by 0.1 of a second
Boys A Team: Alex Mason, Ciaran Patchell, Doug Walshe, Oliver Coffey
Boys B team: Harry Casey, Joe Sweeney, Shane van Zuydum, Patrick O’Donnell

Girls U13:
Well done to our B Team of Kate Cowman, Cara Brady, Maria Coffey and Isabel O’Brien who ran a great race to qualify for the finals and did themselves proud. It was the first time that these athletes had run together as a team and they deserve great credit.

Our A Team strolled to qualification and in the final showed us all why they will hopefully go well at National level when they clocked 57.1 secs in difficult conditions to take the Dublin title. The team was Audrey Del Rosario, Laura Gallagher, Sarah AlMukhaizeem and Emma O’Brien. Well done to the girls.

Girls U14: After blazing to a very quick 1.55 (quickest time) in the heats (again in very windy conditions), the team had to settle for a 1.56 second place finish behind a very good Tallaght AC quartet (1.55). The team of Laura, Emma, Ellen Cheung and Kristina O’Connor can still be very happy with a good days work. Well done girls.The girls will now go to AIT for the All Irelands in March.

Girls U15: “Squad of the day”…Ellen and Kristina joined Sinead O’Shea, Sarah O’Dea and Jennifer O’Brien in taking an outstanding title. Ellen (Heat) and Kristina (final) rotated nicely and Sinead and Sarah set up a great third leg by Jennifer for Kristina to take them home in 1.55. Well done to the girls. The girls will now go to AIT for the All Irelands in March.

Girls U16: This was a straight final with the A team leading from the off and showing strongly. The B team were also showing well and as they entered the last leg Robyn had a slight lead but was overtaken in the last 10 metres by a strong Clonliffe athlete. Nevertheless great running by the two teams:
A Team: Sarah O’Dea, Anna Daly, Natasha Twomey, Robyn O’Brien
B Team: Nicole Gallagher, Molly Ryan, Jennifer O’Brien, Ellie Fitzgerald
The girls will now go to AIT for the All Irelands in March.

So that wraps up another great day for all the athletes and spectators and a big thank you to the coaching team who had the squads well drilled and most of all enjoyIng the day’s competition.