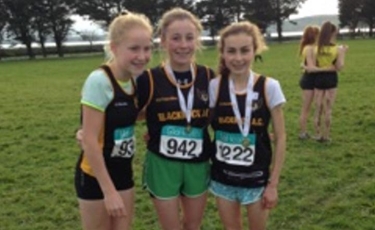 Although it wreaked havoc over the weekend “Storm Desmond” couldn’t prevent Ireland’s top Juvenile XC Athletes from competing on Sunday as Dungarvan played host to the final Club Juvenile championship of the year. The crowds were treated to an exciting set of races with Blackrock athletes to the fore and serving up some outstanding performances. Congratulations to Sarah Healy (U15) and AmyRose Farrell (U17) on their National titles thrilling the large crowd in attendance. It was another phenomenal day for Blackrock AC on the National stage.

First up was Hannah O’Brien who was running in the girls U11’s. Hannah put in a tremendous effort and was part of the Dublin county team that picked up a silver medal on the day. Not a bad way to finish a great season and Hannah’s hard work and dedication in training paid dividends. Congrats to Hannah

The U11 boys were next up and whilst they found the going a little tough they have had a superb year with Robert O’Brien, Conn Lucey, Justin Evers, Sean O’Riagain, Jack Fairmaner and Luke Moraghan (the later three were running up a year) all gaining great experience and thoroughly enjoying the occasion. Well done to the lads

Sarah Healy (whose club commitments were slightly curtailed due to her Leinster Hockey exploits back in October) was the red hot favourite in the U15 girls 3,500m and she didn’t disappoint with another commanding performance and winning out comfortably. Sarah bided her time on the first loop and made the decisive break on the outer circuit of second lap, never looking back and finishing with her trademark sprint. In doing so, Sarah continues her remarkable record of picking up XC titles in the Club championships every year over the last five years (she has six titles at Club XC level alone). Julie Ringrose was equally impressive putting in a really gutsy performance securing 15th place and a big improvement from the same time last year and scoring as fourth Dublin athlete on the day. Both girls were part of a Dublin team with first and second place finishes in the County & Provincial competition. Well done girls and congratulations to our close friends MSB on a fine Club team performance finishing in first place.

Oisin Kelly was running in the U15 boys 3500m and after a very impressive Dubs and schools race(s) hopes were high for a solid run. He featured strongly on the first lap in around 20th position but with the Donore athletes setting a really strong pace the field split on the second loop with Oisin still managing to put in a strong finish. It’s been a great few weeks for Oisin.

The Girls U17 4000m was eagerly anticipated all day. AmyRose Farrell was stepping up a year and after taking the U16 National title in Santry two weeks ago, hopes were high that she could repeat that performance. With the underfoot conditions deteriorating and a highly competitive field taking part, AmyRose set about her race staying out of trouble on a very cagey first lap. Once again, she made the decisive break on the outer circuit and immediately split the field. She kept the change of pace going right up until the last bend where she was able to enjoy the moment as she came across the line as double All Ireland Club champion. It was an outstanding effort. AmyRose also led home the Dublin team to County Gold and Provincial bronze medals. Well done AmyRose on a fine few weeks for the club.