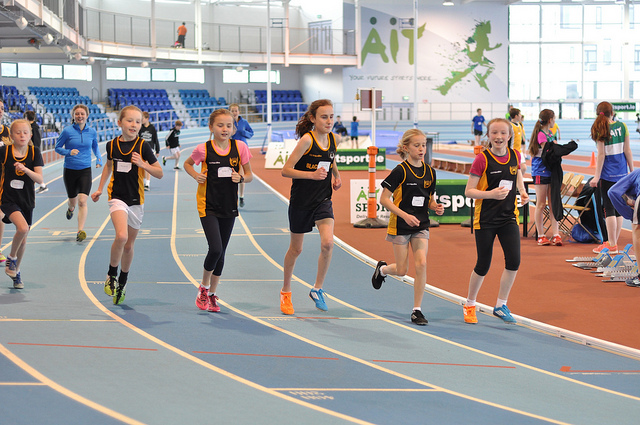 It was dubbed the “Friendly Games” in the lead up to yesterday’s multi Event competition @ the impressive AIT arena where nine clubs participated. The event was originally put together to give our T&F athletes some much needed competition during the winter months and it quickly became an “Athletics Festival” with 149 competitors from the clubs in the U11-U15 age categories enjoying an action packed day.

In keeping with the “Friendly Games” mantra, there were no top 3 prizes on the day and all athletes were rewarded after the relays with a Blackrock AC medal and athletes pack. In this regard we would like to thank the following sponsors: CPL Resources (Peter Cosgrove), Life Style Sports (Nigel Cowman), N4 Car Sales (Terry McGovern/ Kevin Tucker), DLRCC (Gerry Flaherty) and Patricia Forde.

The games got off to an early start @ 10 am with the sprints & LJ competitions and these were closely followed by the middle distance races and relays. And with no shortage of exciting finishes, family and supporters cheered on all the participants in probably one of the most rewarding race meets we have hosted in recent years.

And once the races had finished the coaches from the various clubs were on hand to deliver the three specific workshops: Hurdles, Blocks and High Jump disciplines.

A great learning curve at the end of a long day and I am sure lots of little nuggets of information taken away by one and all!!

A big thank you to John Quirke (our official starter) who oversaw the race proceedings and to all the Coaches, volunteers and officials involved in the various roles. And of course it couldn’t have happened without the support from all the staff at Athlone Institute of Technology.

Will we be back next year?