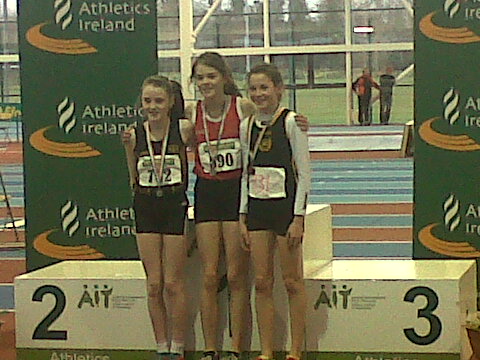 Congratulations to Natasha Twomey on securing her first individual All Ireland top 3 finish in Athlone over the weekend.

Athlone IT played host to this years Juvenile All Ireland Indoor’s competition at the stunning new facility on the North campus. And while the Irish Women’s XC team secured a fantastic 5th place at the World championships in Poland, some of the country’s brightest young talent excited the huge crowds in AIT including several new championship records over the course of the two days.

Well done to Natasha Twomey on a fantastic bronze medal in the girls U14 800m. In warming to the magnificent occasion, Natasha improved her Dublin winning time by 5 secs in the heat on Sunday morning (2 mins 27 secs) which had her as the fastest qualifier and but for a long wait (the final eventually took place at 5.15 pm) her finishing position could have been higher. Her final time of 2 mins 28 secs was equally impressive against very strong opposition. It was her first indoor competition and she will also run with the U14 4 x 200 relay squad in two weeks. Congratulations Natasha.

Kristina O’Connor was also running indoors for the first time over the 60m in the girls U12. We were quitely confident that she would perform well and was a comfortable winner of  her heat in the third fastest time overall (8.78 secs). In the finals Kristina was unfortunate to get a poor start which ultimately cost her a top 3 finish (8.89) but nevertheless it was a fantastic performance and she will only improve from this overall experience. She now turns her attention to the relays where she will anchor the U12 team in two weeks.

Robyn O’Brien was also running indoors for the first time and once again showed her appetite to perform on the big stage with the 4th quickest time in the heats running 8.32 secs. She was drawn in lane 8 for the final and was in contention for a top 3 finish with 10 metres to go and finished in 5th place in a time of 8.35 and unlucky not to run quicker as she was slightly detached from the other athletes due to the disqualification of the athlete in lane 7. Once again an excellent day’s work from Robyn who will join Natasha on a very strong 4 x 200 relay team in two weeks.

Evan Walshe had a fine showing in the boys U12 60m and was looking forward to the 600m but was forced to pull out with an ankle injury. Unlucky Evan and no doubt he will be back to compete again at this wonderful arena.

Congratulations to all of the athletes on their efforts over the weekend for the club.