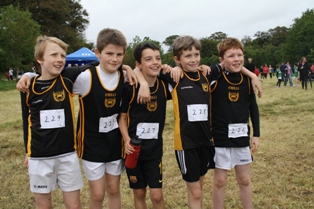 The cross country season started earlier today at a wet and windy Newbridge House in Donabate. We had some fine individual performances in what is a 4 league event with the top six at the end of the 4 events securing medals. Well done to all of those who participated in the various age groups. In particular we would like to welcome the Under 9 squad to their first taste of cross country running. They did the club proud and laid the foundations for a very enjoyable day. The second league event will be in the Phoenix Park on Sunday 30th September commencing at 1 pm. Photos and particpants are included below.  (Photos provided by Frank O’Brien & John Casey)

Participants including  top 3 places were as follows: