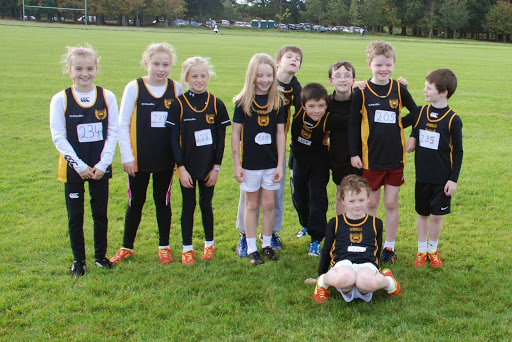 It was a very enjoyable and surprisingly warm day at the Phoenix Park as our athletes stepped up their preparations for the Dublin Championships in two weeks time. As always the circuit provides a tough test and as we edge closer to the Championship distances the athletes turned in some fine performances.

A special mention to Dara Purcell, who was making his club debut in the Boys U12 and was a very impressive winner. Patrick Tucker had a fine 3rd place finish and Cianan Martin and Patrick Crotty ran well to finish in the main pack. A speedy recovery to Evan Walshe who was injured yesterday and could not race today.

Matthew Slevin competed in the boys U9 and in the Girls U10’s Sarah O’Brien had a 2nd place finish. Other athletes were Isabel O’Brien (10th), Natasha Rolland and Lucy Schwer.
The Boys U10’s worked very hard and ran well in a tough race. Those competing were Daniel Mullane (10th), Doug Walshe, Harry Casey, Hugh Crotty, Tom Cosgrove and Patrick O’Donnell.
Sean Purcell secured a top 10 finish in the boys U11 and Sarah Flaherty continues to improve with another good outing in the Girls U12’s race.
Sarah Healy (1st) dominated the U13 race and it was good to see her surrounded by her team mates Lina Kyne (6th), Claire Doyle and Julie Ringrose.
Oscar Meagher made his first start in the boys U13 and brothers Patrick and Jack Moran were also involved in the U15 and U16 races respectively.
Padriag Purcell had an excellent 2nd place finish in the U14’s in his first outing of the season and Sean Kinsella had a steady run finishing in the main bunch.

Well done to all and the many coaches and parents who turned up on the day. Today’s competition brings the curtains down on another League campaign and the races have proved to be very beneficial for all of our athletes. The final results will be posted in the coming days with a few of them in the shake up for top 7 finishes in their age categories.