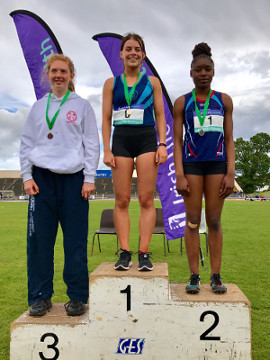 Sarah O’Brien, Beth Carty and Sophie Metchette (all Mt Anville) were part of the team that finished third in the 4 x 100m Minor girls relay. Bobbi Gilespie (Wesley College) had fine outings in the Walk and Pole Vault. She was competing against athletes who were two years older then her, and has gained some invaluable experience in these two disciplines. Emma O’Brien (Mt Anville) had two fine outings, narrowly missing out on top 2 finishes in the 80m and the 200m- she finished third in both sprints. She was then joined by Sarah AlMukhaizeem in bringing the Mt Anville girls team to victory in the Junior 4 x 100m relay. Cianan Martin (St Michaels) had a fine performance in the Long Jump finishing just outside the medals in 4th place  whilst Pappy Tucker (St Michaels) was part of a very impressive boys U16 relay squad who blitzed the 4 x 300m with a new Leinster record. Natasha Rolland will surely go on to favour the Field events and showed her liking for these with a first place in the discus whilst Kristina O’Connor (Loreto Dalkey) added a silver medal in the U16 Long Jump to her 200m victory and Laura Cronin (Mt Anville) was competing in the Girls Junior HJ competition. Ellen Cheung (Mt Anville) went with the early pace in a very fast Junior girls 800m and put in a strong performance finishing in the middle of the pack whilst Oisin Kelly (Newpark CS) was involved in a cracking boys Inter S/C finishing in 3rd place and Tuesday group training partner Roisin Tracey (St Gerards) was hugely impressive in taking the girls Inter 1500m S/C victory. Evan Walshe (St Benildus) unfortunately missed out on the boys Junior 1500m due to an injury. Sarah Healy (HCK) was in commanding form in the Inter Girls 1500m taking yet another Leinster title and was then joined by Grace Manning in securing second place in the 4 x 300m Senior relay. Robyn O’Brien (Mt Anville) took a storming win in the Inter girls 200m having earlier picked up a bronze in the 100m and also led the Mt Anville Inter girls to victory in the 4 x 100m. Lara Gilespie (Wesley College) continued her return from a recent injury with a superb silver in the Inter girls 800m and then swooped for gold with her team mates in the 4 x 300m Senior relay. Beth Sweeney (Sion Hill) was rewarded for her recent hard work in taking a fine bronze in the girls Inter Long Jump whilst Oisin Kelly was back in action over the 3k and had another fine run finishing in fifth place. Lina Kyne (Rathdown) was competing in the Inter girls walk and had a top six finish.

Well done to all our club athletes on fine performances.