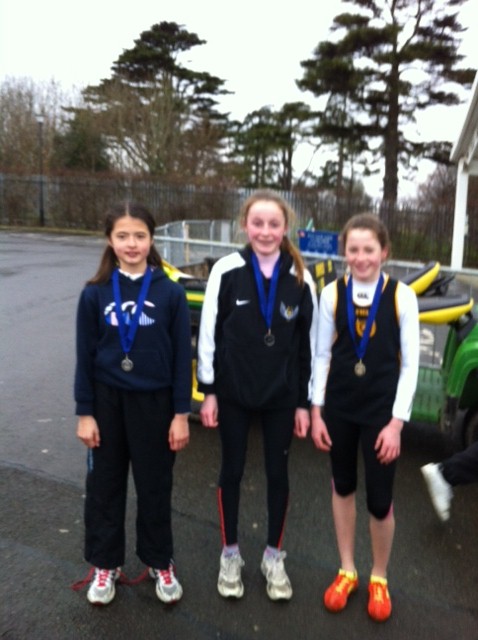 The Dublin Indoors Juvenile competition finished last Sunday in Santry with more success for our athletes. Congratulations to Natasha Twomey who secured 1st place in the girls U14 800m and Sarah Healy (U13) & Ellen Cheung (U12) on securing 2nd place finishes in the 600m. And to Sean Kinsella, Doug Walshe & Harry Casey on securing top 3 finishes in the various Field events.

The full report is as follows:

Under 10’s: Well done to Harry Casey and Doug Walshe on securing Bronze and Silver in the boys U10 Long Jump.

Under 12’s: Well done to Evan Walshe and Eva Maloney who competed in the Field events. In the 600m final we had both Aoife Linane and Ellen running and after a poor start Ellen recovered well to finish in second place while Aoife also finished strongly for a 4th place finish. This was a good showing by both girls who were also involved with the girls U12 relay squad on Saturday. Well done to all.

Under 13’s: Sarah Healy continues her good form over the shorter distances with a second place in the 600m and this capped off a fine weekend’s work after her strong performances on Saturday with the U13 4 x 100 squad and U14 4 x 200 squad. Busy weekend for Sarah !! Jack Moraghan was beaten on count back in the HJ to 4th place and this was a good showing in his first competition at this event.

Under 14’s: Sean Kinsella competed in the Shot Putt event and secured a bronze medal for his efforts- this was his first shot putt competition since last summer- great result Sean- whilst Natasha ran a very strong race, leading from the front very early on and winning out comfortably in the 800m. Again she had a very good weekend with her involvement in the 4 x 200 relay squad on Saturday as her preparations for the outdoor season begin to gather momentum. Well done Natasha on a fine victory..

Also, well done to the U12, 13 & 14 girls relay squads who also qualified for the All Ireland Indoor relays in Athlone.