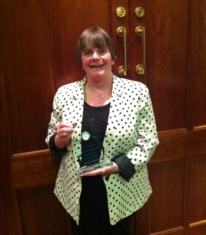 Patricia Craddock-Smith recently stepped down from her role as Secretary of Blackrock Athletic Club. Whilst she will remain an integral part of the coaching team with the Women’s senior section we would like to acknowledge the immense contribution by her with BAC over the years and have included the following short profile (complied by Mary Butler)……
Patricia Craddock-Smith joined the club when she was 11 and competed with distinction as a Juvenile, Senior and Master on Dublin and Leinster teams in road, cross-country and track
and field championships.One of her early successes was being bronze medallist in the 1500m Tailteann Games in 1972. She and her dad won the Club’s Men’s and Women’s Pentathlon title, respectively in 1974.
It was as a senior athlete that Patricia really came into her own, finishing in 9th and 8th places in the 1977 and 1978 All-Ireland Cross Country Championships which put her on the international panel.  She narrowly missed selection for the 1978 World Cross-Country Championships. That same year, Patricia was 2nd woman to Emily Dowling in the first BLE race – the Frank Duffy 10-mile – in which women were allowed to compete alongside men. In 1988 she was on the Blackrock team which won the B Club Section of the National Inter-Club cross-country. Her team mate, Catherine Rooney, won the National Cross Country title in that same race in Co. Cavan.
Patricia competed in many early Business Houses events, and won the Ladies’ race at the Aer Lingus cross country in 1981.  The following year she was 2nd woman in the Ulster Marathon and in 1983 she was second woman in the BLE Dublin County Marathon in a time of 3:11:24, and won the county title. She represented Ireland in the Boston Marathon in 1990.
Further achievements followed as Patricia came 19th in one of the early Mini Marathons and posted PBs of 28.58 for five miles in the Santry Road Race and 35.54 for the 10K in Dundalk. Her 1500m PB is 4.45. When she became a Master athlete , Patricia was selected for the Irish 0/35 team which finished 2nd at the British and Irish Masters’ International Cross Country Championships.  Unfortunately, injury forced her to retire from competition but Patricia, who began coaching the Senior and Master women with her Dad, Paddy, in 1983 continues to do so to this day.