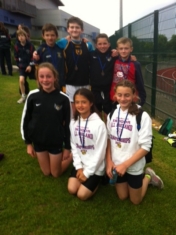 – The girls U12 team were put under serious pressure from Tallaght AC and DSD in their quest to retain the U12 title. In a nail biting finish, Kristina came storming through to clinch the title for BAC. The victorious team was Aoife Linane, Ellen Cheung, Laura Gallagher and Kristina O’Connor. Well done girls on another fine display and the squad has shown tremendous consistency over the last 12 months.

– The boys U12 team were not to be outdone and dominated the final with a tremendous effort from all four athletes. It was great to see them finally getting this victory having been runners up on so many occasions. The winning team was Patrick Crotty, Evan Walshe, Cianan Martin and Pappy Tucker. Well done lads and I think there is more to come from this squad.

– The girls U13 squads both made the final which was a fantastic achievement from our B team of Alanna Scanlon, Anna Dignam, Ally Dunne and Sarah Curtin. In some cases this was their first official outing for the club and hopefully many more to come. Our A team once again locked horns with DSD and on this occasion came out second best but it is a testimony to these two fine teams that they are constantly battling for top spot over the last few years. It was a great performance by Julie Ringrose, Sarah O’Dea, Sinead O’Shea and Sarah Healy. Well done girls on a fine second place.

– The boys U13 squad had their first outing together and whilst they finished in 6th place it was great to see us finally getting a competitive squad together in this category. Well done to Sean O’Sullivan, William Hickey, John Francis Brennan and Pappy Tucker on their efforts and best wishes to Jack Moraghan who was injured the week before in the Hurdles and couldn’t participate.

– The girls U14’s had two teams in the final and again our B team did remarkably well to reach the final as the competition was very high. Ellie Fitzgearld, Ciara Jackson, Molly Ryan and Sinaed O’Shea can be proud of their achievement. The A team were up against it and having finished 5th fastest in the heats it was a great team effort to pull the bronze Medal out of the bag. Nicole Gallagher, Anna Daly, Natasha Twomey and Sarah Healy deserve great credit for hanging in there!! Well done girls…..

– The boys U14’s were hoping for a top 3 finish and didn’t disappoint against what were very strong Donore and Tallaght squads. It was nice to get the lads out for a run as they haven’t had a team race together in over a year due to other sporting commitments. Ruairi Moore, Pardraig Purcell, Patrick McDonnell and Sean KInsella secured the bronze medal for us.

Well done to all the athletes and parents who supported them over the last few weeks.