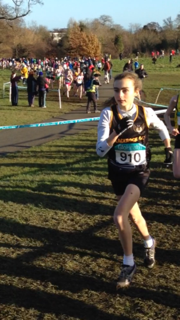 Santry hosted the final Club XC races of the year as the GloHealth Uneven championships hit the capital in fine style. Conditions were windy but dry as the Santry circuit provided a tricky test for our squads. Big congratulations to AmyRose Farrell (U15’s) and Denis Gilevskiy (U11’s) who finished 3rd and 5th respectively.

The day started with the U11’s and we had two cracking contests with Denis Gilevskiy showing his remarkable talent with a fine 5th place finish in the boys event. Denis went with the early pace and half way through the race he broke away with the leading group of six athletes. He managed to hold on strongly and with just over 200m to go made a move that saw him just miss out on the Top four but nevertheless a great performance. In the Girls U11 race Isabel O’Brien was the best of our athletes with a fine 27th position and scoring for the Dublin team who picked up a Bronze medal in the County category. Ciaran Patchell, Louis Dignam, Doug Walshe, Patrick O’Donnell and Oliver Coffey all got a taste of the big stage whilst Sarah O’Brien, Simone Towns, Lucy Schwer, Abby Connaughton and Natasha Rolland were also sampling All Ireland XC running for the first time. Well done to both squads who have had a great season and in particular to Denis on his fine 5th place finish.

Our U13 squad found the going extremely tough and will surely have better days ahead. A great group of lads and in particular hats off to Sean Purcell who had a gutsy race. (He was also running out of his age). Pappy, Dara and Evan made up the squad on the day.

Padraig Purcell was also back in club colours for only the second time this year due to other sporting commitments and produced a solid run finishing in 26th position and scoring on the Dublin County Team that finished in second place. Well done Padraig.

AmyRose was running only her second XC race for the club having won the Counties in fine style a few weeks ago. She was part of a group of three that broke away on the second lap. The pace was relentless and it was a great tussle all the way up the top half of the course and AmyRose was doing her best to hang on but in the end had to settle for third place. A great few months for her and buckets of experience picked up from this great occasion. She had the consolation of leading the Dublin team to top spot in the County category and second overall in the Provincial competition. A great day’s work overall and well done to her.