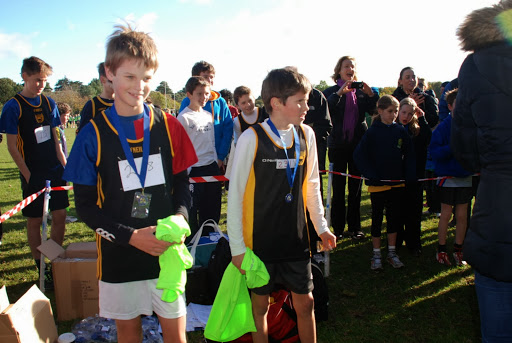 It was another great day for Dublin’s top young athletes as the XC season arrived at the hustle and bustle of St Anne’s Park in Raheny. Once the place of a stately mansion belonging to the Guinness family, today it hosted the Dublin Even Age Championships with a string of great performances from our Juvenile teams.

Congratulations to Sarah Healy and Pappy Tucker who continued our fine tradition at these championships with two excellent individual performances and Dublin titles at U14 & U12 respectively.

The U10’s got us under way with both teams running superbly to secure bronze medals. In the girls race itself, Isabel O’Brien rounded off a fine few months with a very comfortable top 10 position. Other athletes in the girls team were Sarah O’Brien, Natasha Rolland, Lucy Schwer, Abbey Connaughton and Amy McColdrick

Our boys team were equally heroic with a great solo performance by Oliver Coffey on his first outing with the club and backed up by Daniel Mullane, Doug Walshe, Patrick O’Donnell, Lorcan Martin, Tom Cosgrove, Hugh Crotty and Harry Casey.

Eva Moloney and Sarah Flaherty were our sole representatives in the girls U12 2000m and both ran very well in what was a very fast race.

Then it was the turn of our boys U12 team. Dara Purcell set the early pace and had Pappy and two athletes from Cabinteely for company as they completed the first lap in a flash. As they moved down through the woods on the second lap, Dara and Pappy began to stamp their authority on proceedings with Pappy finishing very strong to claim another County title. Dara finished in second place and continues to show great improvement in only his second outing for the club. The boys picked up the Silver team medal and were aided by Patrick Crotty, Cianan Martin. Sean Purcell and Evan Walshe. The team will now go on to participate in the U12 All Ireland’s in Santry on Sunday 17th November. Well done lads.

Sarah Healy once again displayed her outstanding ability over the middle distance with a commanding performance in the U14 3000m. Her success is all the more impressive when you consider that she will run in this age group again next year. The pace was pulsating from the gun with Sarah and the other front runners delighting the crowd with a fine tussle with Sarah taking gold and a well deserved title with a strong finish. Lina Kyne finished in 11th place and both her and Sarah will now move on to the All Irelands in Santry on November 17th. Claire Doyle also had a great run on the day and unfortunately one of our top 3 hopefuls, Natasha Twomey, had an off day but no doubt her undoubted talent will have her back in flying form very soon.

The boys U14 race was equally as quick with Padraig Purcell doing remarkably well to claw back the large gap on the first lap to finish in a fine fifth place. Again, this is only Padraig’s second race with the club and he was backed up well by Sean Kinsella, Will Hickey, Mika Ryan and Ruairi Moore. The team finished in fourth place thus narrowly missing out on National qualification. Padraig will compete with the others on November 17th in Santry.