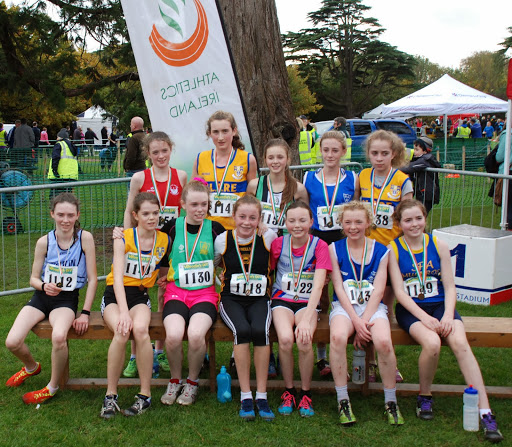 Sarah Healy stormed to her third All Ireland XC title in as many years when securing the girls U14 race in glorious fashion at Santry Demense earlier today. In doing so this was probably the sweetest one to date in a top class field roared on by the Blackrock supporters and her club colleagues.

The day got off to a flying start when Dara Purcell claimed a very impressive 11th place in the boys U12 2000m. Dara was followed home by Patrick “Pappy” Tucker in 18th position and the two lads were part of the victorious Dublin team who secured the County title and finished third in the Provincial Team competition. Our team also had Evan Walshe, Cianan Martin, Patrick Crotty and Sean Purcell on board. Well done to them all and in particular to Dara and Pappy who were the first two home on the Dublin team and held on for fine individual performances.

Padraig Purcell came straight off the football pitch to line up in the boys U14 3000m race. This was a slugfest as Padraig looked to pick off athletes on the second lap to climb into a memorable 12th place and in doing so coming in as Dublin’s third scoring athlete on the day. At the time of “press” we were still waiting for the County and Provincial results but this was a gutsy race and the signs were good for some team honours.** Latest update: Padraig was part of a fine Dublin County Gold and Provincial Silver team performance(s)**

Lina Kyne ran a brave race in the girls U14 3000m having done extremely well to qualify as she will run in this age group again next year and the experience well serve her well for the upcoming U13 races. Well done Lina.

What can one say about Sarah Healy? She qualifies for this age group again next year which demonstrates her incredible talent and she put on a classy display in front of a very vocal Santry crowd on one of her favourite courses. It was always going to be between four or five of Ireland’s top U14 athlete’s and that was the case as they went through the first lap. Down at the bottom part of the circuit Sarah pulled away with a strong DSD challenger and as they moved towards the top end she seized her moment upping the pace with 400 metres to go and stormed down the long finishing strait claiming “Gold” and cementing her position as one of a clutch of very promising young athletes on view today. Sarah led home the Dublin team to first place in the Counties and second place in the Provincial team events. Sarah will now turn her attention to the U13’s and Blackrock AC is proud of her achievements on the National Stage.

Well done to Sarah and all our athletes today