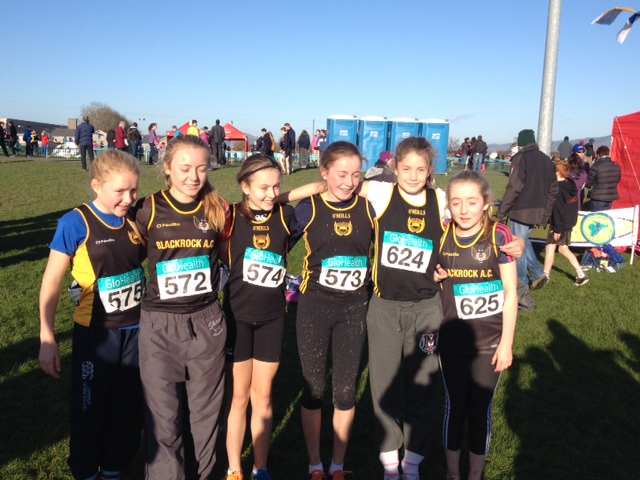 It was another great day for Sarah Healy and Blackrock A.C. @ The GloHealth Inter County & Juvenile Even Age Cross Country Championships in Dundalk Institute of Technology yesterday.

The recent bad weather was replaced with a crisp Autumn morning as Ireland’s latest group of National XC participants headed to DKIT for the Even age Nationals. Underfoot conditions were ideal for XC running and the relatively flat terrain made for high tempo races in the various age groups. Unusually for us, we only had one team competing on the day: our U14 team consisting of Sarah Healy, Julie Ringrose, Lara Gilespie, Lina Kyne, Claire Doyle and Sarah Flaherty.

The downhill start made for a quick opening gambit in all the races with Westport athlete, Saoirse O’Brien, immediately splitting the field in the Girls U14 3000m race. As they came up the hill after 400m the front runners (five) had already broken away from the main group. Sarah Healy had eased her way in to third position at this point and as they edged towards the 1000m mark she made her way to the front and started to take control of proceedings. It was at this stage that she showed her outstanding ability in stretching her lead on the outer lap and putting 40-50 metres between her and the chasing pack. And befitting a National champion, she was greeted with huge applause and admiration by the large crowd (including the Blackrock faithful) when completing the last part of the course in to the long finishing stretch in fine style ahead of Jane Duffy (Shercock) and Soairse O’Brien (Westport). Another outstanding performance from Sarah on the National stage.

Back in the main race Julie, Lara, Lina, Claire and Sarah Flaherty were having to deal with some “heavy traffic” as they battled through the large field looking to pick up points for the team and county. Julie was having a storming run and continued her recent fine form finishing in 30th place. Dublin silver medalist, Lara Gilespie, had a difficult time in the middle of the race but managed to get through that part and battled on bravely for 36th place. Lina was equally courageous in picking off athletes down the home stretch as our fourth scorer with Claire & Sarah Flaherty also finishing very strongly.

Both Sarah & Julie scored on the Dublin County winning team and also on the provincial team that finished in third place. Well done to them both and in particular to Julie Ringrose on a great effort. Lara and Lina were also part of the two squads and it was well deserved recognition for the four of them for all the hard work that they put in.

Our club team had high hopes after last year’s success in WIT but on the day had to settle for 4th place. By no means a failure and a huge amount of experience gained for future opportunities.

Congratulations to them all and to Sarah Healy on another great day for her, the club and her family.

Next up will be the Uneven age groups in Santry on Sunday 7th December.