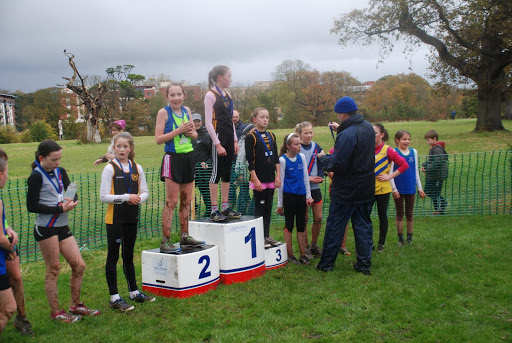 In what can only be described as “true cross country conditions” Sarah Healy produced another outstanding performance to take gold in the Girls Under 12 2000 metres. Lina Kyne continued her fantastic form of late with 3rd place and they both combined with Claire Doyle (7th) and Julie Ringrose (13th) to take gold in the team event. Well done girls.

The day started  with Emily McAleese coming in 7th  in the girls U10 1000 metres. Laura Gallagher, Emily Cosgrove and Emma O’Brien also turned in fine performances in this race.

With no sign of any improvement in the weather the girls under 12 race got under way and in a pulsating second 1000 metres we had four Blackrock athletes filling the top 12 spots. Reigning All Ireland champion Sarah Healy made her move with 300 metres to go and finished strongly to once again land the Dublin Counties title. She was followed home by Lina Kyne in 3rd place and this was another excellent performance from an athlete that is improving with every competitive race. Both Claire & Julie ran strongly to bring the team the first Dublin gold team medal in over a decade. The performance was all the more remarkable when you consider that this was both Claire’s and Julie’s first XC competitive outing of the season. Well done girls. All four will go on to run in the All Ireland’s.

Will Hickey was in the leading group for most of the boys U12 race and narrowly missed out at the finish line on a bronze medal but his 4th place finish secures a place on the Dublin team at the All Ireland’s where he will be joined by Luke Reynolds who finished in a fantastic 10th place with Jack Moraghan finishing in 14th place. This was also Luke’s first competitive outing of the season.

Our final athlete on the day was Mark Dignam who after a lengthly absence through injury,ran extremely well to finish in 12th place and secure a place on the Dublin squad for the All Ireland’s. Well done Mark.

Congratulations to all our athletes who performed exceptionally well in the very difficult and trying conditions.