In what was another outstanding weekend for Irish Junior athletics, Sarah Healy was once again the stand out performer, with a double gold at the European U18 T&F championships. Her achievements led the Irish squad to one of their most successful competitions ever at this level which was widely acclaimed at home and abroad. 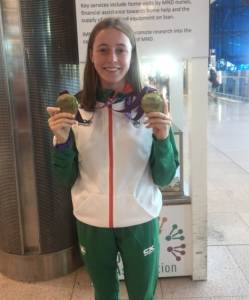 Sarah was entering these championships off a string of impressive performances which installed her as the firm favourite for both the 1500m/ 3000m. She was also returning to Gyor, the scene of last year’s EYOF championship triumph, where she picked her first European title over 1500m.

The races themselves had no shortage of excitement with Sarah displaying a maturity beyond her years in delivering top class championship performances. After comfortably qualifying through the heats of the 1500m on Friday morning, she turned her attention to the 3000m in the afternoon. In a hotly contested race Sarah moved through the gears producing a stunning last 1k (covered in a highly impressive 2.58) to set up her first Gold medal in a new CR of 9.18.05. Indeed such was the high calibre of the race, the first six athletes all achieved outdoor PB’s. This achievement on its own was hugely impressive by Sarah who is still only 17 years old

She had to wait until Sunday evening for the 1500m final and whilst the stakes were high for a unique double, she remained composed throughout, throwing in an impressive 64 sec last lap, to clinch her second title in front of a large and jubilant Irish contingent. She did so with another CR in 4.18.71.

Congratulations to Sarah’s family (Eileen, Julia and Phil) and her coach (Eoghan Marnell) on a memorable weekend. The club would also like to congratulate the other Irish athletes who were all in superb form over the four days most notably Rhasidat Adeleke’s Gold in the 200m and Sophie O’Sullivan’s Silver in the 800m.

In a remarkable year, Sarah’s displays have catapulted her to the top of the European Junior rankings and along the way she has notched up several National records.

Truly magnificent- once again congratulations on these milestones and a historical weekend in Gyor from everyone at Blackrock A.C.