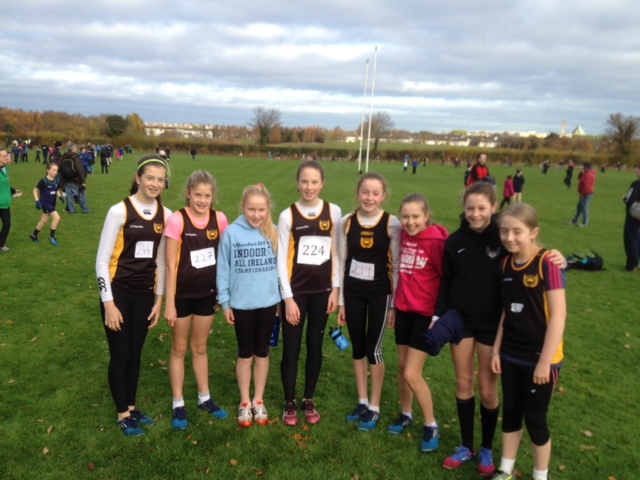 Sarah Healy continues her outstanding form on the XC circuit with a fine victory in the Girls U13 race at Tymon Park earlier today. It was another notable day for the club which started with the Boys U9 team in action.

They team ran extremely well with Shane Van Zuydum leading them home in a fantastic 10th place and he was ably supported by Matthew Slevin, Luke Fitzgearld, Conn Lucy and Ronan Fahey. The team secured a bronze medal and well done to them all. It was great to see the lads running well as a team and we couldn’t have asked for a better start to the day…..

The Boys U11 team also had a fine showing with Sean Purcell finishing just outside the top 12. Tim, Daniel and Tom also put in strong performances and once again it was great to see us flying the flag in this age group. Well done lads.

The Girls U13’s race was over 2500m and despite what looked like a relatively flat terrain, the three lap circuit proved to be a tough test for the competitors. Sarah Healy dictated matters from the start and lead the team home to a victorious first place and another fine individual run. She has been hugely consistent over the last few months with a string of strong performances for both her club and school. The team stacked very well with Lina Kyne (5th), Julie Ringrose (6th), Claire Doyle (14th), Sarah O’Dea (15th), Jennifer O’Brien and Sarah Flahery. Sarah Healy, Lina and Julie will now go on to represent Dublin at County and Provincial level and will also be part of a very strong BAC team in Waterford on December 15th. Great running from them all.

The Boys U13’s were not to be outdone and they were led home by Dara Purcell in 4th place, Will Hickey (9th), Pappy Tucker (10th), Evan Walshe (15th), Jeff Kenny, Jack Moraghan and Oscar Meagher. This was a great performance when you consider that Dara, Pappy and Evan are all eligible for this age group again next year. Dara, Will and Pappy will also represent Dublin at County and Provincial level and will be joined by the others in the Club event. It is some time since we had a boys team running at All Ireland level…..and it is a testimony to both teams who have worked very hard in training and to our coaching staff who have targeted team honours in this age group from as far back as September.

Natasha Twomey put the disappointment of St Annes behind her as she stepped up a year to run in the U15 3500m and had a fantastic showing to finish in 3rd place. Natasha ran a very calculated race and got her just rewards with the top 3 finish. She will also go on to represent Dublin at County and Provincial level in Waterford.

A big thank you to the large Blackrock contingent and the coaching staff for their support and great work today and also to the Dublin County Board and in particular Cecil Johnston for putting on a very well organised event.

So the XC season is almost at an end but as we edge towards the All Ireland Finals in Waterford in a few weeks don’t rule out a perfect storm to close out the 2013 season for the BAC Juvenile athletes.