It’s hard to believe that January has come and gone. What a great start to the year it has been though, with so many activities going on involving Blackrock A.C. January is always a great month, with new members joining and we would like to give a special welcome to any of you who joined recently. You will be pleased to know that there are activities literally all year round, so you will always have company and somewhere to run when you want!

Don’t forget to share the fun and tell your friends that membership is open. New to running? Check out our recent article on Running for Beginners.

Want to get more involved? Blackrock A.C. is seeking members to commit to writing one article per year on an interest of your choice. Full training and guidance are provided as well as topic ideas you can cover if required. We are also seeking volunteers who can help with race reporting for the Junior and Juvenile sections. If any of this sounds like something you would be interested in, please email info@blackrockac.ie

Arik completed his 100th Parkrun at Cabinteely Parkrun earlier this month. Having previously confided in some that he is ditching long runs to become a ‘professional parkrunner’ it will be interesting to see just how many more he gets in before the year is out.

Junior member Charlie ran his first Parkrun in Cabinteely Parkrun, of all places on Saturday, January 8th. He came home first in an incredible 18 minutes 26 seconds.

Well done to the 28 runners who ran for Blackrock A.C. as part of the Dublin Masters Cross Country. We had many fine runs in this tough competitive event especially by first-timers Carmel, Valeria, Victoria, Emma, Jennifer, Joe, Pat, Richard, David and Peter. On the day we had two medalists; Helen (1st F50), and Grainne (3rd F60). Congratulations everyone, See some photos and the club results below.

As a club, Blackrock A.C. was shocked and saddened to hear of the killing of Ashling in Tullamore on 12 January. All women should feel safe while running or exercising, something many of us takes for granted. A minute’s silence was observed on Tuesday 18th January before training. Present on the evening were Blackrock A.C. Women’s and Fit4Life Captains Sinéad Howard, Gerry Flaherty as well as many members of the club. 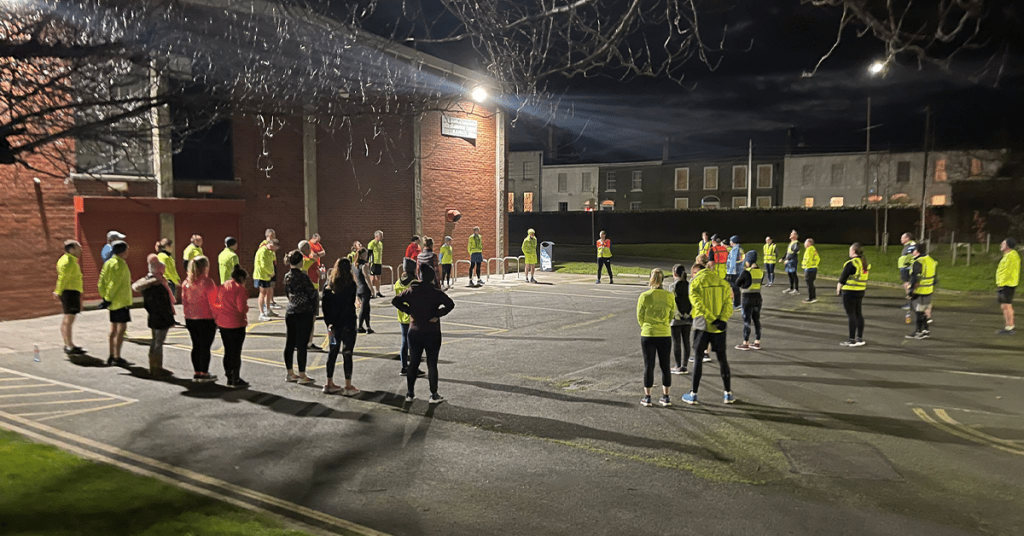 The 38th AXA Raheny 5 Mile Road Race took place on Sunday 30 January. Congratulations to the 54 Blackrock A.C. members who completed the Raheny 5 Mile on a slightly long course (5.3miles). It was a magical day with Blackrock A.C. Junior members taking part in the earlier race. Followed shortly after by the adult cohort, it was a special feeling running through the streets of Raheny with over 3,000 people. The atmosphere was electric throughout, with many picking up PBs of some description during the race also.

The actual race itself was 5.3 miles with the hosts acknowledging the reports and are currently investigating.

The finish of the day probably goes to Rob and Ted or is it Ted and Rob, in this case? You be the judge.

This is possibly the highest ever participation at any race by the club and well done everyone.

Please keep an eye on our events page where we will post all races that Blackrock A.C. members are likely to take part in.