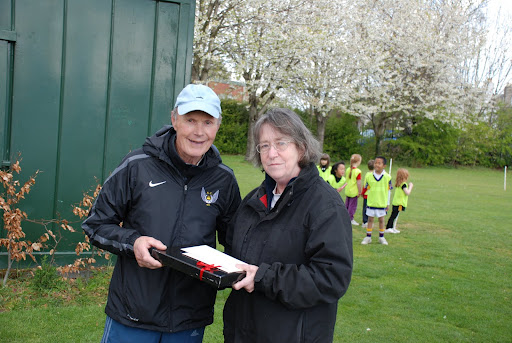 Muriel McAuley has stepped down from the committee after giving many years of loyal service to the club.

She was first elected to the committee in 1991 and some three years later took over the role of treasurer, a position she was to hold for some 18 years. She was a very efficient operator and ensured that the club continued to run on a sound financial basis.. She was deeply involved in a number of fund raising activities that helped raise the bulk of the money required for the purchase of and the installation of our clubhouse. These included the running of an annual auction together with a patrons night amongst other things. She also played a major role in the running of the annual Christmas “turkey trot”. In addition Muriel found time to represent the club in officiating at Dublin Juvenile competitions.

Muriel was a very caring person and was always very concerned with the interests and welfare of the club’s young athletes.

Today, Blackrock AC Junior section has over 150 young athletes. Fellow clubs all over Dublin have expressed their delight in seeing us compete at the various competitions and Muriel should take great pride and satisfaction in the contribution that she has made in helping to make us a force to be reckoned with again.