After the last two years of virtual races and runners running on their own because of the COVID-19 pandemic, the arrival of 2022 brought the easing of COVID-19 restrictions and the resumption of real races.

Always a favourite fixture amongst all Blackrock A.C. runners was the Raheny 5 mile which took place in late January.  Thirteen Blackrock A.C. women participated in this event with six of the BAC women scoring Personal Best results (Emma McGrane 35:25, Michelle Langan 35:30, Patricia O’Neill 37:30, Breda O’Keeffe 38:45,  Sinéad Howard 41:30, Deirdre Howard 49:30.  It was an enjoyable day out, even with the bonus of having to run an extra 500m on the day!!! February may have seen a dampening of the weather, however, it didn’t hinder Patricia O’Neill from scoring a Personal Best result of 79 minutes 27 seconds at the Trim 10-mile race.

March saw some brighter and longer days and more Blackrock A.C.women participating in races including the Bohermeen half marathon, Mullingar half marathon and the Wicklow Way trail half marathon.  Clare Morgan came second in her age category (F60) at the Dunboyne 10K.  BAC women also participated in the BAC club fundraiser, Run 4 Ukraine, clocking up the kilometres while raising vital funds for two charities, Moral Fiber and the Irish Red Cross. 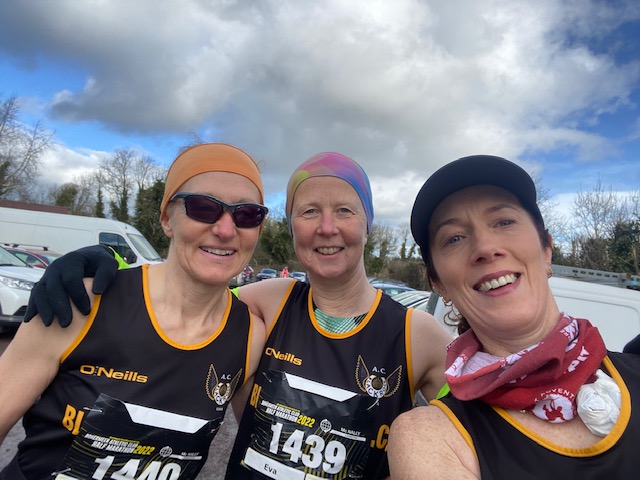 The women’s section has welcomed several new members to our section since the start of 2022.